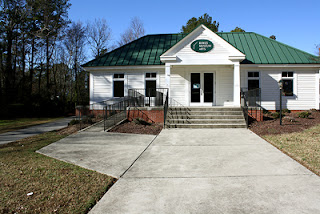 The Walter Cecil Rawls Library and Museum was first envisioned in 1952 by Walter Cecil Rawls, a St. Louis businessman and native of Southampton County. In searching for a suitable site, Mr. Rawls enlisted the aid of his boyhood friend, Junius W. Pulley who suggested the Courtland location. Both Mr. Rawls, an inventor and amateur artist, and Mr. Pulley desired that the library would include a museum to house artifacts of the county and collections of art.
The library-museum opened to the public on June 15, 1958. The first exhibit in the gallery was assembled by the Rev. C.W. Gibson, minister or Courtland Methodist Church. The exhibit featured art work by local artists and a display of Civil War memorabilia.
In 1966, F.D. Cossitt, noted art critic, sculptor and art historian, became museum curator . Mrs. E. F. Reese, III chaired the Arts Committee of the library board which was headed by J.M. Camp, Jr. At the time the museum was organized as an affiliate of the Virginia Museum of Fine Arts. In 1980 the museum /art division became a separate non-profit entity known as Rawls Museum Arts, Inc. Its objective was to expand cultural outreach by offering more programs, art classes for young and old, exhibits, trips to the Virginia Museum and opportunity to acquaint regional residents with the many facets of art. Under the auspices of RMA in 1984, a group of working artists formed the Blackwater Artistís League.
On December 1999, RMA celebrated the opening of a new gallery. The building houses the Main gallery, the Francis Gallery which includes a Children’s Gallery, the Artworks Gift Shop, storage space, and offices. It also houses an extensive permanent collection of art.

RMA continues to offer programs to the citizens of the City of Franklin, and the counties of Southampton, Sussex, Surry and Isle of Wight. Visiting curators, lecturers, jurors, artists, performers and educators facilitate programs and exhibitions that are as diversified as the subjects, media, artworks, and lessons they present.

It is hoped that the entity that is now Rawls Museum Arts would have been pleasing to Mr. Rawls and his dream.

Email ThisBlogThis!Share to TwitterShare to FacebookShare to Pinterest
Home