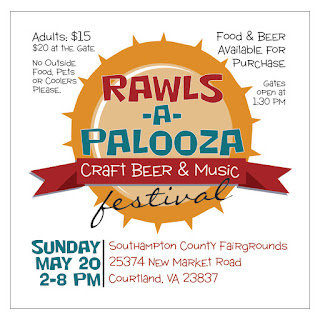 Rawls Museum Arts, a Partner of the Virginia Museum of Fine Arts will present RAWLS-A-PALOOZA, a Craft Beer & Music Festival on Sunday, May 20th from 2 pm to 8 pm at the Southampton County Fairgrounds, with the gates opening at 1:30 pm. Tickets are $15 in advance and $20 at the door, children 12 and under are free. Proceeds from the event will support programming at Rawls Museum Arts.

The admission price covers entertainment by five Virginia bands.  Craft beer, food and other beverages will be available for sale from local vendors.

The band line-up will begin at 2 pm with Common Ground Bluegrass Band and the world-class flatpicking guitar of Mo Canada of Smithfield. Adding the talent of George Atkins of Ivor, Ricky Vaughn of Windsor, Billy Budd of Urbana, and Ed Canada of Courtland, the band offers some of the Tidewater area’s best blend of Bluegrass, folk, and country music.

Taking the stage at 3 pm is Lobo Marino, named after the enormous Pacific Sea Lion, Lobo Marino's brand of experimental folk draws from a rich palette of international and folk influences. Built primarily on harmonium, bass drum, banjo and various unique instruments and voices, Lobo Marino continues to evolve as the musical response to the continuous travels and ongoing spiritual journey of its members, Laney Sullivan and Jameson Price.

The Prabir Trio is a power pop trio comprised of Richmond musicians who write original music rooted in hook laden Indie rock. Front man Prabir Mehta has entertained with numerous bands including Goldrush and Prabir and the Substitutes, who released multiple recordings while touring alongside Dr. Dog, The Silver Beats, The Parties, The Old Ceremony and more!  The Trio begins at 4 pm.

Ben Phelps Project will kick off at 5 pm. The six-piece project merges elements of jazz, acoustic folk, blues, and rock into a melting southern soul. The BPP has played shows throughout the East Coast including performances with B.B. King, Buddy Guy and The Romantics. The band has released three albums, including “New Ghost Town” that was licensed to The Discovery Channel, MTV2, and VH1 for use in over ten television series.  Currently, “Goodbye Summer,” the third album release, is garnering critical acclaim and radio success regionally charting several top 10s on the OurStage Music charts.
Headlining the festival from 6 pm to 8 pm will be Richmond’s NO BS! Brass Band, who recently premiered on The Tonight Show Staring Jimmy Fallon and on the Tiny Desk Concert on NPR. The band takes the traditional New Orleans brass ensemble into uncharted territory, fearlessly combining elements of James Brown, John Coltrane, Michael Jackson and Led Zeppelin. Trained in the conservatory and hardened in the garage, No BS! Brass band have performed at Ottawa Bluesfest, Festival d’Ete, NYC Winter JazzFest, Nelsonville Fest, Lockn, Eaux Claires, and were recent recipients of a Mid-Atlantic Arts Foundation grant.

"I like the No BS! Brass Band either way: kicking it with funk or clearing room for a screeching free-jazz solo. The point isn't to redefine what a brass band can do, but that's what No BS! achieves. From Virginia comes a storm of a brass ensemble that has decided it can do what it wants as long as it does it very, very well."  Jim Fusilli, NPR - All Things Considered

The Southampton County Fairgrounds are located at 25374 New Market Road, in Courtland VA. No outside food, pets, or coolers please. Bring a chair. For information email leighanne@rawlsarts.com.